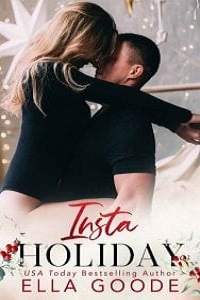 “I wish it would snow.” Rory Carlson sighs, looking up at the sky.

Rory spins around and points a finger in my face. “Tyson Carter, if you don’t stop following me, I swear to God, I’m going to do….” Rory stomps her foot in frustration because there’s not much she can do to me. I’m a god, little g, here in Edison. I was Edison High’s star quarterback, winning the state championship three times in a row, and in Texas that means you can kill someone and get away with it. Me following around Rory Carlson in her battered Jeep as she makes deliveries for different businesses in town is not going to raise even one eyebrow.

“Just keeping you safe,” I drawl. Rory looks especially good today in her skinny jeans and white T-shirt with the faded Wonder Woman logo. Her eyes are shiny and bright, which tells me she got a good sleep last night, which is rare for her. During the week, she delivers for the hardware store, the café, and the grocery store. She waits tables at the café Thursday through Saturday. On Sunday, she cooks at home, preparing enough food for the week for her family. At some point, she’s going to drop from exhaustion, and so I need to be there to catch her.

“I’m eighteen now, not seven, and do not need anyone—particularly you, Tyson Carter—to keep me safe.”

I don’t roll my eyes, but I want to. “And that incident with the meth head a month ago was what? A welcome encounter?”

She scowls. “It was an accident. Harry wouldn’t have hurt me if he wasn’t high. He thought I was an intruder and was trying to protect his home.”

“I agree, but he was high, and he’s an addict, so the chance that he’ll be high and violent in the future is greater than zero.”

“Yes! All you do is follow me around or hang out with Sterling Justice. Don’t you have ambitions?”

She throws up her hands like this is a completely unreasonable statement. “That’s not an ambition.”

“Rory, we both know I’ve got money.” I don’t know why she’s upset about the fact that I’m spending my days watching her instead of the stock market.

“Your parents have money,” she corrects. She wrenches open the door of her Jeep and climbs in. “That’s not going to last forever.”

“Pretty sure it will.” My dad runs over the books with me once a month and has since I was fifteen. Not because he expects me to take over. Nope. He wanted me to know that all I had to do in high school was excel at sports. My state trophies, my individual awards, all sit on a shelf behind his desk. I think he polishes them nightly.

“You don’t know that. Besides, I want someone who can keep up with me, someone who has the same kind of drive.” She guns her engine. “And that someone does not follow others around and post dumb videos on social media. I’m going home now. Don’t follow me, and stop posting stuff about our non-existent relationship! We are not dating!” She peels out of the hardware store parking lot without a look behind her. I lift my phone and take a video.

“I know that.” So does everyone who follows me. After blurring out the license plate, I post the edited video with an update. “That feeling when your crush leaves you in the dust. Literally.”

I get twenty thousand views within the first few seconds of posting it. I don’t know why, but the internet is keen about my one-sided romance. My follower count increases every day. I’m going to hit three hundred thousand soon.

“Was that Rory Carlson?” a voice asks.

I look over my shoulder to see Cane Justice ambling over. His boot heels make a soft clicking noise against the asphalt. “Yup.” I turn my phone screen toward him.

A long, low whistle glides from between his teeth. “She wants nothing to do with you. I like the touch of her giving you the finger.”

“I felt like that was important to keep in—for authenticity’s sake.” I tuck my phone away.

“Sterling come to town with you? I haven’t seen much of him lately.”

“He’s busy with the princess. Her dad’s moving into the ranch.”

“It’s getting to be a full house. Good thing Sterling and Maria are going off to college. Gives us some time to get a house built for them.”

My best friend has fallen for a real-life princess. At first he thought the dad was going to object to the relationship, but it turns out that the Justice Ranch is exactly what old Prince Harold needed. The Justice house is bursting at the seams with three of the Justice cousins getting hitched.

Because misery loves company, I ask, “How’s Astor these days?”