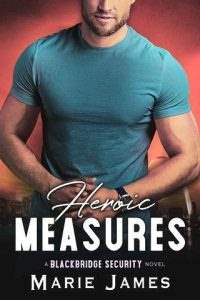 “Am not,” I argue, doing my best to hold in a sigh and failing. “I’m checking up on that information you said you’d gather for me.”

“While sitting in your truck?”

I look through the front windshield. The parking lot is packed, and just the sight of the cars lined up in front of the gun range makes my palms damp.

“It’s trivial,” Wren argues. “And I told you before you left the office that I’d have it done by the time you got to work tomorrow.”

“And I said I’m just checking.” I pinch the bridge of my nose, hating just how transparent I am to the guys I work with.

I’m not Mr. Social like Brooks and Flynn. I can’t pull off broody like my best friend, Quinten, is able to do. I can’t even manage charming and slightly weird like the IT specialist I’m on the phone with.

It’s as simple as that, and even at thirty-one it takes more effort than I’d like to admit to doing things as simple as getting out of my truck and walking into the gun range.

Unfortunately, I opened my mouth at the wrong time, trying to explain what a woman’s body goes through during labor to my boss whose wife is pregnant. He wasn’t impressed with the random bits of information, and because I don’t know when to keep my mouth shut, I’m forced to be here, at the gun range to help my best friend teach gun safety and shooting to more than a dozen women.

Quinten Lake landed the spot as instructor because our weapon expert, Kit Riggs, had something else going on. The class for Quinten is an annoyance. For me, the thought of walking in there makes my heart rate kick up and my eye twitch.

What I struggle with is having a normal conversation without peppering it with useless knowledge just to keep the conversation going.

To say the least, I’m awkward.

My friends know it.

And within minutes of walking into the gun range, everyone else is going to know it.

Case in point, my jaw practically unhinges when I spot a woman walking across the parking lot. Long blonde hair floats in the breeze as if the wind couldn’t help but to run its fingers through the golden strands when it had the chance.

She’s taller than the average woman—that’s five feet four inches in the United States if you’re wondering—and the jeans she’s wearing look like they were designed for every inch of her long frame.

“Are you going to hyperventilate?”

I jolt at the sound of the voice coming through the truck’s audio system, jamming the tip of my finger painfully as I rush to turn down the volume as if the woman walking thirty feet away can hear the conversation.

“Shh? Really, Jude? If it’s that much of a big deal, just call Deacon and tell him you can’t do it.”

Irritation simmers deep into my gut at the implication. I’ve spent years facing the things that have the ability to make me anxious. People who meet me may think I’m shy, but I’ve come a long way from the perpetually exhausting battle of facing my fears.

“I’m going in,” I argue, more to hype myself up than anything else.

“Have a good class,” he says, and I catch his chuckle before he ends the call.

The woman stops a foot from the front door, frowning when she pulls her phone from the back pocket of those delicious jeans. Like she is preparing herself for battle, she shoves the device back in her pocket and lifts her head a few inches, her back going ramrod straight before tugging open the heavy door and disappearing inside.

I could never approach a woman like her. The confidence she radiates alone is enough to keep me at a distance. The possibility of rejection is too great to ever take the chance.

What I can do is admire from a distance. I’ve become an expert in the art of fading into the background and just observing, a life skill honed and perfected from decades of being overlooked. My unassuming nature makes it easy for people’s eyes to skate right over me when they’re looking for a thrill or a good time.

I don’t radiate enthusiasm like some of my friends do, and I’m okay with it. I don’t want to be the center of attention. I don’t think my nervous system could handle being in any sort of spotlight.

And that’s the crux of my situation right now. Going inside the gun range to help Quinten puts me right in the middle of more than a dozen eyes, and it would be just my luck that one of those pairs will belong to the gorgeous blonde that disappeared inside just moments ago.

My phone chimes with a text, and I know it’s from Wren before I even look down at the screen.