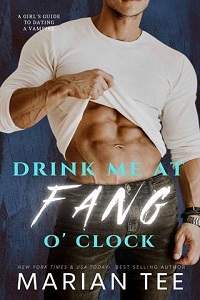 That was what I kept telling myself as I watched the people around me scream and run for their lives, only to end up screaming some more as creatures who couldn't and shouldn't be real bared their fangs before going for their victims' jugular, literally.

And then it was my turn.

Ice crept over my skin as a creature's red-rimmed gaze zoomed into me from a distance even as it continued to drink its fill from a dying man's neck.

You're next, the monster promised with its soulless eyes, and I believed it.

I knew those words would come true if I didn't start moving...now!

Terror strangled my throat as I whirled around and ran without looking back, heart thudding against my chest, and lips trembling in the effort to hold back my sobs—-

The lights in the entire facility suddenly went out, and darkness unleashed an unseen storm of fear and despair to swallow us whole.

Another second later, red eyes were all we could see, and they were everywhere.

People started crying, but this only made the creatures laugh as if relishing the way their presence had sucked out hope from their prey.

Because that was what we were now, weren't we?

And when the killings started again, that was what I held onto.

We were prey now.

ALL OF US were prey now, and so if I wanted to stay alive, I needed to think like I was prey and act like it. Prey meant I was the weaker species, and to be weaker was to have no pride. Prey meant knowing when not to fight back and just...hide.

So get your butt moving, Juliette Hidalgo, and HIDE!

Another round of screams razed my ears as I dropped to the floor and crawled.

I crawled over torn limbs that squished and squirted under my palms, and I kept crawling even as I slipped and landed face down on invisible pools of blood. I crawled even as my heart shattered into pieces, and I kept crawling until the corner of something sharp and painfully hard nearly punctured a hole into my scalp.

I wanted to cry because this stupid table made my head sting, but I also felt like crying in relief.

This should do, right?

All I needed was to hide behind it and keep those red eyes from seeing me. All I needed to do was to hunker down and stay down until—-

The voice was frail and hoarse.

The sound made me want to throw up because I knew if she kept making noises like that, she wouldn't survive this.

Prayers worked, yes, always. But prayers were no excuse to do something ill-advised. I opened my mouth to beg her to not make any noise—-

But I was too late, and all I could do was grit my teeth as my soul wept and grieved.

They got her, oh God.

And then I heard it.

Even when I couldn't see anything, I knew that was the sound of her neck breaking, and now all I could hear was some creature slurping her blood like her body was nothing but a vessel to drink from.

And sooner or later, all of us would be like her—-

The word roared to the forefront of my mind, and I had to swallow back a sob as I came to understand just how much the world had changed in one horrifying blink.

Things that could only happen in fiction were now a part of my reality.

And I had no idea why or how it started.

All I knew was that if I wanted to survive—-

I needed to remember I was prey.

The word seemed to have taken on a life of its own, but its incessant taunting inside my brain was gradually being drowned out by the gruesome sound of blood being guzzled all around me.

It was as if I had found myself suddenly transported to some stupid chug fest, only...what they were gulping down here was blood—-

—-and it was coming from living, breathing sources that screamed.

Oh God, how they screamed and screamed, and I could feel myself growing numb as the creatures drank and drank and drank. Fear was slowly losing its grip on my heart, and it was all because my own world was fast turning bleak and dire.