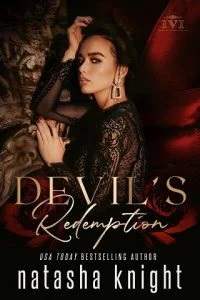 “What did you do?” Isabelle hisses. She’s naked, on her feet pounding small fists into my chest. She has no energy, though. Her strength is zapped from days of not being able to keep any food down and probably weeks worth of frustration.

To look at her now, I’ve gotten what I wanted. The beginnings of it at least. A Bishop in my clutches. Weak to the point she can barely stand. My baby in her belly.

My future should be bright. I’m well on my way to burying Carlton Bishop. But it doesn’t feel very bright right now. In fact, I don’t feel anything but a creeping darkness as I take her in my arms trying not to bruise her. Not to hurt her.

What I accused my brother of—his weakness when it comes to the suffering of this particular Bishop—have I become so weak? Has she worn me down as much as I’ve worn her down?

“What’s happening?” comes a little voice from the hallway.

“Get her out of here!” I yell to anyone who is listening. “Get Angelique out!” She will not witness this. I won’t allow her to see Isabelle in this state. See me in this state. She cannot know what I’ve done.

My mother’s soothing voice comes over Isabelle’s accusations and a moment later I hear the door click closed. My mother was the one who alerted me to Isabelle’s ‘bug’. She knew, I’m sure, that it was no bug.

“Lay her down. I’ll give her something to relax her,” Dr. Barnes says.

“Get your hands off me!” Isabelle protests as I wrap a towel around her, lift her, cradling her against my chest. “Let me go you bastard! You lying bastard!”

“I never lied to you,” I clarify calmly as I carry her to the bed. She struggles. Doesn’t she know yet I won’t let her go? Especially now. But her struggles don’t matter much. They only cause the towel to drop to the floor.

Dr. Barnes has the blanket pulled back, but I shake my head. “I want her in my bed,” I tell him and let him follow me through the connecting door to my room.

“No! Let me go!” She’s half sobbing, half fighting now.

“No, Isabelle,” I say, voice low and steady. “I’ll never let you go.” I lay her down and sit beside her, keeping both of her wrists in one of my hands with just enough pressure on her to keep her down. “Stop fighting me.”

“I will never stop fighting you,” she cries out, her voice catching as tears stream from her eyes. Her gaze moves beyond me and her panic is renewed. A glance over my shoulder tells me it’s Dr. Barnes approaching with a needle.

“No. If there’s a baby this won’t hurt mother or child.”

“No! Please!” Isabelle thrashes, kicking her legs. I have her arms pinned to her chest. I turn her onto her side and trap her legs with my free arm as Dr. Barnes swabs an alcohol prep over her hip then pushes the needle in.

She whines as he does it but the effect is almost instantaneous. I feel her legs and arms go weak, her body grow limp.

I loosen my grip and roll her onto her back. When I release her, her limbs relax. She tries once to slap at me, but it doesn’t work. She can barely lift her arm a few inches.

“Why did you do it?” she asks, her words beginning to slur as she struggles to keep her eyes open. “Why would you do this to me?”

Guilt grips me in a way it never has before. Not when Kimberly died. Not when I took Isabelle. Not since and not ever before. This, what I’m doing now, I am actively doing.

I am doing the damage.

I am consciously destroying this life.

You always have a choice. All of life is a choice. My own words haunt me. When I spoke them to her they were over something so inconsequential. Now, this? It’s the opposite.

I swallow the guilt down. Harden my heart. I make myself think about Kimberly. How she died in my arms. But something has shifted. Something has changed. And all I see is Isabelle’s face. Hear her desperation. The defeat in her voice.

“Why?” she asks weakly one last time, eyes closing as her head lolls to the side.

I’m saved from answering because she’s gone now. Asleep. I draw the blankets up over her and brush wet hair off her face. I look at her here in my bed. Small and vulnerable. So vulnerable. And innocent.

I know the monster I am. I’ve always known it. I’ve just never cared. Until now.

“I’m sorry,” I say so quietly no one could have heard me.

Dr. Barnes clears his throat. I collect myself and stand. I draw a second blanket to her chin.