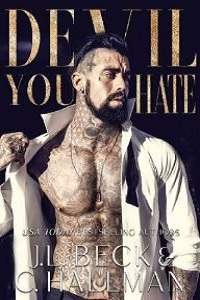 Marriage. A legal bond of love and the union of two people becoming one. For many women, it’s the greatest moment of their lives. It’s something they’ve dreamt about; the beautiful dress, the gorgeous venue, and a handsome prince charming who would swoop in and sweep them off their feet.

When I was a little girl, I had those same dreams. I thought I would marry for love. That my future husband would be my fierce protector, my knight in shining armor. It’s too bad that was all a lie.

As soon as I was old enough to realize that my life was never really mine, I let the idea of marrying for love go and accepted reality. Which leads me to my current predicament.

I have to marry this stupid man. It’s the only thing that echoes in my head as my fiancé sits beside me in my family’s dining room at dinner. Like always, no one speaks. The only sounds are the scraping of forks across porcelain and the occasional tinkle of ice when my mother lifts and lowers her whiskey glass. Her third since dinner began, if I’m counting correctly.

She’d gone all out for tonight’s meal. It was a rare occurrence that we ate dinner together. I spend most of my evenings propped against the kitchen counter as the chef tosses things on a plate for me to scarf down between my local volunteer appearances. I’ve never even seen this china set before. In fact, I didn’t even know we had any.

I glance over at my soon-to-be husband from under my lashes. He’s handsome enough, with high cheekbones, a sharp jawline, and soft black hair, but looks aren’t everything. At least not to me. We’ve only spoken a handful of times since my father cemented the Ricci and Gardello alliance a couple of weeks ago. An agreement hinging on me marrying Marco, the dumbest of the five Gardello brothers.

As a second son, he won’t be heir to his own family, but as the only child left to the Ricci’s, I suppose he becomes the successor to mine.

The thought causes bile to rise into my throat, and any appetite I had evaporates into thin air. My sister should do this—my beautiful, smart, brave older sister.

Pain slices through my chest at the reminder, and I spare a look at her empty chair on the other side of my mother. The one we’ve all been dancing around since her suicide six months ago.

Blinking back tears, I suck a breath into my lungs. I won’t cry in front of these people. It will only enrage my father and cause my mother to drink more. Then again, maybe I should. Marco needs to know what he’s getting himself into.

He blots the sides of his mouth carefully with a napkin and spins his own whiskey glass (neat) on the tablecloth. I’m stuck in a trance, wondering why my sister had to take her life. Why isn’t she here right now? Out of nowhere, Marco boldly turns to me. I feel his penetrating gaze on the side of my face. The heat of his stare traces the scar that bisects it from my mouth to my eyelid.

Usually, I couldn’t care less about my scar, but the way he gawks at it like it’s a two-headed dog, I hate it. I shift forward a little, letting my long brown waves slide into place. Like a curtain, it obscures not only my face but also the pink tinge in my ears, if the burning in my cheeks and neck is anything to go by.

“By the way, you look lovely tonight,” Marco compliments, while continuing to stare at me.

I barely keep from squaring my shoulders and preening under his gaze. He spoke louder than necessary, telling me he’s trying to show my parents how nice he will be to me once we marry. Once he has my trust fund. My life.

I’ll be like a dog, collared and cared for but never free. It’s hilarious that he even attempts to show interest, as if my father would change his mind. Maybe he cares, or maybe it’s just a ruse?

“Thank you,” I choke out, keeping my eyes trained in front of me.

“Celeste,” my mother hisses from across the table.

She’s the only person in the world who calls me by my full name.

My father simply calls me Girl, as he did my sister. No doubt, even twenty-odd years later, he’s still disappointed we aren’t boys.

Boys get names, girls get… well… married off to cement alliances.

I know what she expects from me, and I hate that in the next instant I turn in my chair and offer Marco a smile. As the only daughter left, I need to be good, to be here. Even when I want to be anywhere else. I have a duty to fulfill, an obligation, as my mother has called it many times over. I owe this to them, my parents, and family name.