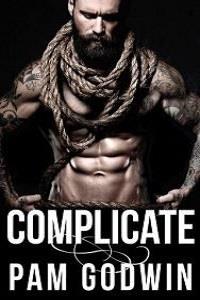 Cole Hartman lowered his head to his hands, wrestling with the insidious sense of foreboding. Over the last seven months, it emerged without symptoms, invading gradually, subtly, but with detrimental effects.

Dread was eating him alive.

He sat on the floor in the armory of his safe house, his back to the wall, knees bent, and stomach clenched in knots. Down the hall, his beautiful, free-spirited dancer was likely practicing her choreographic sequences of the biggest production in the history of wedding dances.

For as long as he’d known Danni, she’d fantasized about her wedding dance.

Hers and his. Their first dance as Mr. and Mrs. Hartman.

Over the past few months, she’d been teaching him the steps. Dancing was her thing, not his, but he didn’t mind learning. Hell, rubbing up against her hot little body would never be a hardship. He fucking loved her. So goddamn much it hurt.

But something was missing.

Four years ago, he’d left her to complete a one-year, undercover assignment overseas. They’d only been together for ten months at the time. He shouldn’t have gone. He didn’t know that year would turn into several more.

Without her knowledge, he’d left her under the protection of his best friend, Trace Savoy. In doing so, he’d inadvertently fucked his fate and shoved his entire world into Trace’s arms.

After botching the mission, faking his death, losing Danni to his best friend, and finally, finally winning her back, he’d crawled out of hell, alive and victorious.

He’d chosen his job over her, and in the end, she chose him over all else.

His decisions had destroyed her life, and in return, she gave him her heart. Again.

The shattered pieces of his miserable existence had been put back together. He didn’t deserve her, but when he’d returned from the dead, he put every ounce of life into earning her forgiveness.

He’d fought countless battles through his clandestine career, but seven months ago, he won the only war that mattered.

He won back his dancer.

But something was missing.

The depressing lyrics of James Bay’s Let It Go trickled through the armory. Racks of guns covered one wall, the rest occupied by file cabinets, desks, computers, phones, and high-tech gear. The kind of equipment that didn’t exist outside of his classified unit.

In the corner, her wedding gown hung on a hook. It didn’t belong in here. Not in a room crammed with weapons, secrets, and deception.

When he’d taken the dress during their separation, he wanted it in a safe place. He longed to see her wear it as she walked down the aisle, toward him, toward their future together.

Nothing stood in their way now. She’d chosen him. Agreed to marry him. Everything was right in the world.

The soft tread of footsteps approached from the hallway and paused on the threshold.

His pulse quickened as it always did when she was near. His entire being pulled toward her as she entered the room. He didn’t move, didn’t make a sound, his senses alert, tracking her graceful movements as she floated past his shadowed position on the floor near the door.

She took in the space, lingering on the wall of firearms. This was her first glimpse behind the armory door. He always kept the room locked. Kept her out. She shouldn’t be here. Her spirit was too bright, too gentle amid the guns and dangerous evidence of his business.

As if realizing that, she quickly turned back to the door and paused, startled, her gaze fastened on him. Then she smiled.

The first smile she’d ever given him had been life-altering. She’d stepped in front of his motorcycle at the crack of dawn, wearing almost nothing. Except her smile. It’d been so big and full of life, it softened his insides, turned his brain to butter, and made him weak.

He didn’t regret a second of it.

No man with a pulse could regret her. Danni Angelo was a blonde bombshell with a compassionate soul. Beautiful inside and out.

Grey eyes, fair complexion, she glowed with light and stunning sensuality. Her lithe limbs and athletic physique befit her occupation as a professional dancer. But it was her smile that stole the show. And broke hearts. His heart, specifically.

She’d broken him as much as he’d broken her. Crushed. Mended. And soon to be demolished again. He felt it looming—the pain, the devastation, the inevitability of forever’s antonym.

Never was coming for him.

Because something was missing.

It was missing in the smile she wore now. Her bowed lips curved like they always had. Her eyes illuminated with angelic beauty. But it wasn’t a Danni smile. Not the one that had railroaded him the day they met. Definitely not the one that tilted the universe and knocked him off his feet.

It lacked the energy that made his heart rev. It didn’t crackle the air and charge his blood. It was low on sunshine, devoid of music, and desperately in need of life.