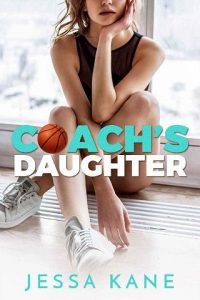 I can name a hundred places I would rather be right now than a nightclub.

Most of the time, I can get away with an excuse or flat out tell my teammates to fuck off, but this is different. These are new teammates, a new city, and I’m signing a contract tomorrow that will make me their point guard. I have to put in the time with them, show my face, earn the kind of trust that will translate to the basketball court. Unfortunately, a lot of that faith is earned off the hardwood.

If my skill spoke for itself, I would be home right now instead of this dark, noisy establishment, a row of untouched drinks in front of me. I massage the bridge of my nose, attempting to get rid of the pounding in my head, the overwhelming mixture of cologne and perfume making me nauseous. These places are exactly the same, no matter what the city. Dallas, New York, Minnesota, Los Angeles.

It’s all become a blur.

“Bentley!” One of my new teammates falls onto the leather banquet of the VIP section beside me, throwing an arm around my shoulders. “Welcome to LA, man.”

I force a quick smile onto my face for the team’s power forward, Rashid. “Thanks. Looking forward to putting ink to paper tomorrow.”

“Tomorrow is a hundred years away, my dude. We’ve got the whole night ahead.” With a hand the size of a pizza pan, he gestures to the writhing mass of bodies on the nightclub floor, one section below us. “You’re Eric “The Silent Assassin” Bentley. Take your pick of these women. Let’s get you a celebrity welcome to LA.”

I start to say no thank you. For a lot of reasons.

The last time I slept with a woman, my freshman year of college, the unthinkable happened. Now? I don’t let loose anymore. I don’t take my eye off the ball. Don’t drink or party or bring home strange women, no matter how badly I need relief. Whenever I get the urge to be self-destructive or forget my scruples for the night, I remember what happened that night and the impulse goes away.

That’s what I start to say, but then I see her.

This cute little blonde who looks like she wants to murder someone.

Her nose is screwed up, fists balled at her sides and she’s staring up at a man twice her size, ready to throw a punch. My stomach trades places with my heart. Who is that? Why do I have a hard time breathing when I look at her? Before I even know I’m moving, I’m standing up and demanding to be let through the red velvet rope of the VIP section to the main club floor below. Behind me, my future teammates high five, assuming I’ve spotted the female I want to take home.

“Bentley!” one of them shouts behind me. “Just crook your finger at her. She comes to you. Not the other way around.”

Something tells me this girl doesn’t come when a finger is crooked at her.

It might have something to do with the right cross she just delivered to the man’s jaw. A sound halfway between amusement and worry leaves me, swallowed up by the pumping club music. The crowd is parting around me, people taking selfies and asking for autographs, but I plow ahead, determined to reach the pissed off angel, because God forbid the man she just punched decides to retaliate. If he lays a finger on her, I’ll be in prison for murder instead of LA’s new starting point guard.

The closer I get to her, the more everything starts to move in slow motion.

Not dolled up or dressed to entice. Just subtle in a black tank top tucked into tight, little shorts. Sneakers. Hair all windblown, cheeks flushed. No jewelry, except for an oversized watch on her wrist. God, I’ve never seen a fiercer expression on anyone. She can’t be taller than five foot two, yet there’s no denying she’s a warrior. What is she doing to my chest? I can’t seem to slow my heart rate or pull in enough oxygen. The music distorts around me and all I can hear is pounding in my temples.

Everything shoots back into sharp focus, however, when the man she punched grabs her by the shoulder. She winces—and I see red. The club goes into fast motion around me and I lunge the remaining distance, pushing my way between them and dislodging his hand in the process, knocking the bastard back several paces. That’s when it hits me that I’ve just intervened in a situation I know nothing about. For all I know, this man is her boyfriend. Or husband.