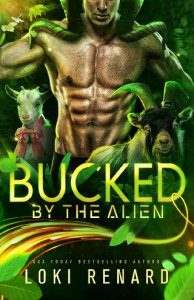 Alone on a wild alien planet in mating season…

I was assigned a mandatory emotional support animal when I volunteered for a five year solo mission to a remote alien planet.
I got a goat called Strumpet. (Probably should have questioned the name.)
She’s sweet until she comes in season, and then there is no stopping her.
No tie, no fence, no barrier will stop her from seeking a mate.

When Strumpet escapes into the wild, I go looking for her.
When I find her, she’s in trouble. (What else is new.)
She’s found a local mate.
That male belongs to a big, bad alien barbarian with big, hard… horns.
As soon as Gruff sees me, he forgets all about my goat.
It’s mating season, and I’m going to get bucked.

The one I am watching is moving through my territory completely unaware. She is human, female, and of fertile age. A mane of red hair is braided and pinned to her head, but I see it flashing every time she moves her head, which she does a lot as she looks around to what to her is unfamiliar terrain.

She wears clothing over almost every inch of her body, the attire wrapped tightly around her feminine form. My gaze keeps dropping to the curve of her rear. That is a bottom made to be owned.

These thoughts are a travesty. Humans should be slain on sight. That is the law of our land.

“Strumpet!” she calls out in her strange human tongue. She makes this sound often.

Finally, a creature answers her cry. I see a small goat break out of the brush and come to be by her side. It is a female animal as well. It, too, moves with a certain naivety. Both of them are in immense danger. Neither one of them seems to notice. I watch as the little doe nibbles at leaves, just barely avoiding the poisonous plants that grow alongside the nutritious ones.

As for the human, she strides about the place with the sort of confidence reserved for the very young and the very simple. She appears to have decided to forage alongside her goat, picking berries and fungus from the forest seemingly at random. I watch as she very nearly puts a piece of terribly poisonous mushroom flesh into her mouth, only to trip over her goat and drop it. She loses interest at that point, and instead pulls a ration from her pocket. It smells sweet and rich even at a distance. It is not the only scent emanating from her. She smells like female. Like woman. Like sex. It is a smell that is being carried far and wide. I am sure I am not the only buck to catch the scent.

I am looking at two prime examples of invasive species, but I do not need to kill either one of them. The way they are going they will not last until the end of the day. Unless, of course, someone were to do something to save them.

Someone is watching me.

The hair on the back of my neck stands erect as the eerie sensation of being seen flows through me, an ancient instinct still yet to be explained by science. The sensation is extra creepy because I am supposed to be alone on this planet. If I am being watched, it can only be by something with predatory intent.

An alien world is unfolding at my feet, twin suns burning off misty green fog to reveal a mountain jungle of unimaginable beauty. This world is wild, and I must be wild to survive it. For the next five years I will live here completely alone. I am a member of Earth’s extraterrestrial services. EET, and it is my mission to explore, investigate, and document every inch of this remarkable world.

I almost jump out of my skin. I keep forgetting she’s there. Strumpet lets out a little goaty laugh and nibbles at the strap of my pack for good measure.

“Quit it,” I say, waving my hand toward the pest.

She does not quit it. She ignores me, as she has been doing since we met, more or less. I look down at her, into her sweet golden eyes and I speak words of censure and judgement.

Strumpet is a specially trained support animal. Well, of sorts. She’s not your traditional support animal. She’s a goat, for starters, and not a particularly large one. She comes up just above my knee and has a habit of screaming loudly at inopportune times. I’ve come to rationalize her presence by telling myself that she’s just as good as any dog, with the added benefit of being able to survive on almost anything.