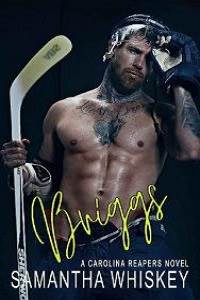 New Year’s Eve had never been my thing, but I was willing to make an exception this time. After all, any year that started out hanging with my teammates had my vote, even if we had to put on the monkey suits and smile pretty for the camera at a charity gala.

I’d always had a soft spot for kids’ charities, and even if the shoes were fucking killing my feet, nothing was bringing me down tonight—not when I’d signed a two-million-dollar endorsement deal yesterday that helped fund the check I’d just dropped off with London, the coordinator who was running tonight’s events.

I made my way through the packed ballroom, spotting an empty table toward the edge of the dance floor. I staked my claim and ordered a ginger ale from a waitress passing by. Not that I was against drinking. I wasn’t. I just didn’t drink in situations where the alcohol could fuck with my judgment, and by the number of gorgeous women here tonight, there was plenty of judgment capable of being fucked with.

Ginger ale it was.

I’d spotted most of my teammates by now and made my rounds taking pictures with donors and fans, so I felt zero guilt about anchoring my ass to the table. You could only smile so many times before it was obviously fake.

Where the hell was Sterling? That guy was right up there with Caspian when it came to his ability to charm the money out of patrons.

“Looking lonely, Briggs,” Langley said, leaning up against the table beside me. The brunette was dressed to kill in a green evening gown, but that was all I noticed as I turned my attention back to the dance floor. She was married to my captain, Axel, and I made it a rule to keep my eyes to myself when it came to wives—or girlfriends, for that matter.

“Lonely or peaceful?” I joked after thanking the waitress for my ginger ale and asking her to keep them coming. If I had one addiction in this life—besides the sweet taste of pussy—it was sugar. “Because I see some of the drama floating around the locker room, and I’m just fine where I’m at.”

“Noted.” Langley chuckled. As the head of the public relations team for the Reapers, she was more than aware of the drama brewing on the bench. “Wait…” She leaned forward, narrowing her eyes as she looked across the floor. “What the hell are those idiots doing?”

I followed her line of sight to where two of our rookies were currently stripping down to the band’s rendition of I’m Too Sexy. Somehow, I managed not to spit my ginger ale all over the table, but damn, the carbonation burned my nose. McKittrick was swinging his jacket around his head, and Greene had a blonde reaching for the buttons on his shirt. “See what happens when we aren’t lonely?”

“One night,” Langley muttered. “I only ask for one damned night.” She gathered up the skirts of her dress and maneuvered around the table.

“Do you need any help?” I offered.

She shot me a look that answered my question loud and clear, then stormed her way across the dance floor, leading the two rookies off like the immature toddlers they were.

“There you are!” I rolled my glass between my palms as Sterling took Langley’s place.

“Did I miss anything exciting?” He rolled his neck like his tux was personally trying to strangle him and searched the dance floor like it was a live-action Where’s Waldo. He was looking for London, not that I was going to call him on it. If he wanted to talk about the massive fuck-up of falling for the Reaper’s game day coordinator—who also happened to be our teammate’s little sister—I’d be happy to listen, but I wasn’t going to force some cringeworthy conversation on the guy, especially since it looked like his brother had been after the same girl.

That whole situation was awkward as fuck.

“If you count Langley hauling off the rookies by their ears after they got trashed out of their minds, then maybe.” I laughed and thanked the waitress who’d brought another ginger ale with a smile.

Sterling glanced between the glass I held between my palms and the fresh one on the table.

“It’s ginger ale,” I said, nudging it toward him.

“I figured. Thanks.” He nodded and continued his crowd search, sipping on the soda. The guy was a bundle of nerves. His posture was rigid, his neck strained, and the lines between his eyebrows were deeper than Coach’s during an overtime period.

“It keeps women from offering to buy me a drink.” I shrugged. At a gala like this, there was no telling if the flirting women were actually single and available or committed and just didn’t care. I cared.

“Good point,” Sterling muttered, sighing as the band switched it up, playing something from the big band era. Finally, his shoulders relaxed a few inches, as though he’d given up looking for her. “Hey, I heard you signed a new endorsement yesterday.”