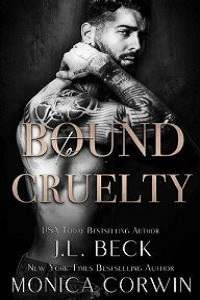 Are we playing babysitter to every fucking mafia princess on the east coast? Waiting in the hall, I catch the last of Kai’s phone call, knowing any moment he’ll request one of us to take care of this. With Andrea barely functioning and Alexei trying to diffuse his sister, that leaves Ivan and me. Ivan is handling the family’s day-to-day business at the moment. I’m the only one who can leave again at the drop of a hat.

Doesn’t mean I want to race off and help Kai’s sister, the very sister who was supposed to be protecting him and Chicago but left him, and Rose, to rot. She doesn’t know the meaning of family and doesn’t deserve our protection. So I’ll wait, and I won’t go unless Kai orders me to, and even then, I might have to think about it first.

Andrea marches down the hall, her dark hair swinging behind her in a shining mass. Today, she’s traded her stilettos for black combat boots, which means someone might end up dead. Considering how active Sal’s family is, and with the intel she’s gathered under her surveillance, it looks like she’s ready to take things in her own hands. Adrian told her not to make any moves yet, but I’m in favor of a good…culling. Those bastards need to be wiped out completely. From the grandparents who founded their empire on the blood of children to the cousins who may or may not be involved in the smuggling.

I don’t give a shit; they are all going down.

“Michail,” Kai calls from his bedroom.

Even though they share actual DNA, he and I are more family than they will ever be, and for that alone, I’ll do what he asks. Hopefully, she’ll comply and let me tuck her away into a safe house somewhere to hide until whatever she is dealing with blows over. I suspect, with the season open, she’s obviously not equipped to handle things. Someone must have tried a coup and succeeded if she called for an extraction and protection.

So where does that leave our council friends in Chicago then? A good question.

I run my hands through my curls, which are mussed and tangled from all the traveling and wrangling Kai’s big body back in one piece. So I leave them instead and walk into Kai’s bedroom to take in the scene of domestic bliss.

Rose is turned away, under the covers, asleep by the soft snores I can hear. I shift my focus to Kai. “You need something?”

“Yeah, I need you to go to Chicago and get my sister.”

I clench my jaw. “Are you sure about that? She was supposed to be protecting you and didn’t do shit, apparently.”

Despite lying flat on his back in bed, no shirt, no clothes at all from what I can tell, his tone hardens. “It doesn’t matter what she did or didn’t do. I don’t go back on my word, and if she needs help, she’ll get it.”

I sit on his bed, careful not to jostle his woman awake. “And what’s your secondary plan? How do we keep things cordial with the Chicago council if you’re taking her away just after their season opens? What if the new head of the council in her city doesn’t take it so kindly?”

“Do I look like I give a shit about council politics?”

I sigh. “You should? This is a game we all have to play now, or each ripple in the pond will send back repercussions.”

His gaze turns to ice. “I don’t care about your fortune cookie logic. Go to Chicago, get my sister, and keep her safe. That is an order, and as an order, I expect you to follow it without question.”

I level him a look. “None of us do anything without question. You know that better than anyone.” He nudges his leg over to scoot me off the side of the bed. I stand and dance out of reach before he can do any damage. “I’ll bring her back, put her in a safe house, and she’ll be fine.”

I don’t bother asking, why me? It would border too close to whining than I’m comfortable with. Instead, I face him, hands on my hips. “Are you sure about this? You want her here? Even after she didn’t hold up her end of the bargain, and even though you two don’t necessarily get along?”

He stiffens, then grimaces, settling back into his fluffy pillows. “Who says we don’t get along?”