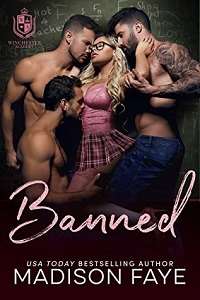 This is a really, really stupid idea.

The words tumble through my head for maybe the eleven-thousandth time as I duck behind the bushes and creep forward under the window to the campus security office. The hard-shell guitar case in my hand bangs against my shin, and I wince in pain, but I keep going. This might be my first time sneaking off campus, but that doesn’t mean that I don’t understand that the first rule of sneaking off campus is don’t get caught sneaking off campus.

Especially not tonight. Not with what’s at stake for me.

I move quickly, panting, my heart racing as I scurry across a dark stretch of the campus quad and into a thicket of trees. Winchester really is beautiful at night, with the manicured gardens and grounds, the ancient stone walls, and the gorgeous Tudor-style buildings. It’s like sneaking around Hogwarts or something. Except it’s not a magic wand or broomstick in my hand, it’s a guitar. Because tonight, I’m going to my first ever audition for a real, live band.

Real enough and exciting enough to give me the balls to sneak off of my boarding school campus, after curfew, on a school night. I should mention that for a complete and utter band nerd like myself, whose never once gone to a party, or broken curfew, or broken really any rule at Winchester, this is wildly and completely out of character.

But, it’s worth it. Even if it’s dangerously stupid. I mean, this is my dream, and even if the orchestra, and the pep band, and the jazz band I play in at school here are great and challenging in their own rights, the opportunity to play in a real rock band, with gigs lined up and even an opportunity to compete in the Rockland county Battle of the Bands next month, is too good to say no to.

And tonight, I am not saying no to it.

Tonight took planning, too. I mean you don’t just decide to sneak off of the Winchester campus one day having never done it before. It took time to figure out when my dorm’s head resident would be back in her own room and not prowling the halls. It took time to figure out where the maintenance guy keeps the spare key for the laundry room exit door in the basement, the one that leads out to the maintenance dock and dumpsters behind my dorm hall. And, it took time to scope out the big wrought-iron fence that surrounds Winchester and discover the old side-entrance behind the campus security office. It took perfect timing to wait until the end of the football game tonight before changing, grabbing my stuff, and making my daring escape, seeing as I play tuba in the marching pep band that played tonight.

Tonight, the gate squeaks, but it’s a quiet squeak, thanks to the olive oil I snuck out of the dining hall at lunch and dumped over the rusty hinges earlier. I slip through, shutting it behind me and shivering with excitement as I realize I’m outside the grounds now. I glance down the street, and my pulse quickens as I spot the headlights of the cab, I just ordered fifteen minutes ago, waiting right where I asked it to.

I glance one more time back at the fence, and the campus behind it, take a deep breath, and start hustling for the cab. The stiletto heels of my thigh-high boots strike loudly on the quiet sidewalk, and as I near the cab and notice the cab driver leering at me, I’m made very much aware of just how short my skirt is. Or how skimpy my purposefully torn AC/DC tank top is. To say nothing of the scandalously sexy pair of black thong panties I’m wearing. I blush when I think of slipping those on earlier. I mean it’s not like I’m that girl. I’m not going to an audition and like, taking my freaking clothes off or anything, no matter how insane an opportunity it is. But they make me feel sexy, and confident, and I need both of those things tonight.

Obviously, none of this outfit is dress-code appropriate for Winchester. And quite honestly, this skirt would even probably warrant a stern talking-to from the resident advisor or other faculty even if I wore it outside of classroom hours on the weekend. But tonight, this is me. This is my look, I mean, I’m sneaking off my high school campus to audition for a rock and roll band.

The driver doesn’t seem to give too much of a shit that I’ve pretty clearly just slipped out a side entrance of a private boarding high school. Well, first he tells me I have to be eighteen to ride alone in a cab, but he only gives my ID the briefest glance before he grunts and puts the car into drive. We roar through the night, through downtown Southworth and over into Rivington next door, where my audition is at. I shiver as I look out into the night, my hands gripping my bag and my guitar case tightly.