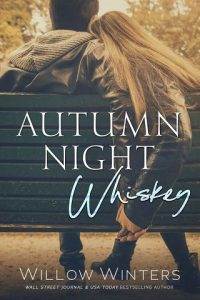 Two Advils sit in the palm of my hand, and I’m quick to throw them back and wash them down with a bit of tea. It’s the perfect temperature. A black and white caricature of a Boston terrier wearing pink glasses with a fifties-style bow adorning her ear looks back at me from the ceramic mug as I set it down on the counter. Quietly. Everything is done oh so quietly so I don’t wake up Bridget … again. Please, Lord, let my little girl sleep for more than twenty minutes. Unless she’s on top of me, her little fists holding on to my shirt, sleep is hit or miss.

Everyone keeps telling me to let her cry it out, but if she’s crying, so am I. I can’t stand the sound of her wailing. It’s like she’s begging me to just pick her up and hold her. Ugh. I don’t know that I can do anything right, but I can at least hold my baby girl.

I’m grateful for a moment to myself, though. Just a moment.

I shouldn’t even have caffeine this late, but I needed something soothing. Something that would calm me down after the day I’ve had. Or maybe I should say, the day we’ve had.

The sudden knock, knock, knock at the front door has me sucking in a breath and holding it in as I race to answer it on the balls of my bare feet.

Just as I’m peeking through the peephole, Robert raises his hand.

Don’t you dare. I seethe with apprehension and rip the door open as quickly as I can before his knuckles rap on the door again.

“Shhh,” I scold him, finally letting out that breath. “She’s asleep,” I say, stressing the word asleep although he has no idea how much it means that my two-month-old is sound asleep in her rocker and letting me have a single moment without her screaming at me.

Every cry carries with it the idea that I’m a bad mother. That I don’t know what I’m doing. It all reinforces how much I miss my mom. I have never missed her more in my life. She would know what to do. She’d be right here to help me if she could.

The breeze from outside is chilly, forcing me to wrap my arms around myself. The satin pajama shorts and camisole sleep set I’ve got on barely covers me. The thought reminds me it’s probably stained with milk and I’ve been wearing it for at least two days straight.

“Sorry.” Robert’s hushed answer comes complete with that puppy dog look in his eyes he’s had off and on for the better part of a year since I’ve been home. A gust of wind tinged with salt from the sea licks by us as I stare back at his pale blue eyes, wondering why he’s here so late. Crickets chirp behind him as he scratches the back of his neck and whispers, “I just stopped by because I heard you were looking for me.”

Opening the door wider, a gesture that he can come in, I leave him there while I gather up rent. He didn’t make me pay a deposit, and he didn’t come for last month’s rent either. Ever since I moved in here, after selling the last of my father’s estate like the court ordered, I’ve known that I owe Robert more than I can repay him. Not just moneywise, either. His help with navigating the legalities of what my father’s scandal left me with. His help with the funeral even … I can’t repay all of it, but I can at least give him rent.

The chirps and nightlife chatter are silenced as he steps inside and closes the door. My back’s to him, but I hear it all as I stare down at the cash in the kitchen drawer.

His frame is far too large for that doorway. He’s always been taller than me, but lately he’s felt … distant. Everyone has. It’s then I take him in.

He’s the same as he’s always been, devilishly handsome, yet charming. Tall but not overbearing. It’s his strong shoulders and even stronger jawline that give him such a masculine appearance. Combine that with a clean and crisp cologne, simple khakis and a navy collared shirt, he’s the sight of a Southern gentleman if there ever was one. Complete with baby blue eyes and dirty blond hair that used to make me weak in the knees. It all still does.

The creak of the floor as he makes his way to me, causes me to wince and turn my back to him so I can stare at the baby monitor.

Back to the present. Back to now and rent being due.

With no movement on the monitor, I count the money again. It’s all in twenties, but the full six hundred is there. I know a two bedroom in this area goes for more than that, but it’s what Robert told me rent would be. Next to it is a pile of paid bills, each marked off with a permanent marker after I mailed in the checks. Adulthood is expensive and I never knew every little thing could add up so quick.