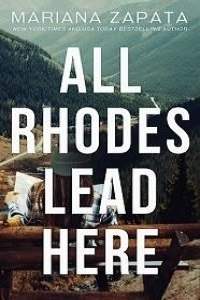 My eyes burned. Then again, they hadn’t stopped stinging since it had gotten dark a couple of hours ago, but I squinted anyway. Coming up ahead, on the very, very edge of my car’s headlights, there was a sign.

I took a deep, deep breath in and let it right back out.

Then I read it again just to make sure I hadn’t imagined it.

I was here. Finally.

It had only taken an eternity.

Okay, an eternity that fit into a two-month period. Eightish weeks of me driving slowly, stopping at just about every tourist attraction and two-star hotel or vacation rental along the way from Florida through Alabama, Mississippi, and Louisiana. Spending time in Texas and then skipping to Arizona, exploring towns and cities I hadn’t had time to check out in the past when I’d come through. Even visiting an old friend and his family too. I went to Vegas while I was at it because it was somewhere else I had been to at least ten times but had never truly gotten to see. I spent almost three weeks in Utah. Last but not least, I took a week to check out New Mexico before circling back up toward the mountains. To Colorado. My final destination—I hoped.

And now I’d made it.

Or just about made it.

Letting my shoulders sink down, I pushed them back against the seat and relaxed a little. According to the navigation app, I still had another thirty minutes left to get to the place I was renting on the other side of town in the southwest part of the state most people had never heard of.

Home for the next month, or maybe longer if everything worked out the way I wanted it to. I had to settle somewhere after all.

The pictures online of the rental I’d booked were just what I’d been looking for. Nothing big. Not in town. Mostly though, I’d fallen for it because the rental reminded me of the last house Mom and I had lived in.

And considering how last minute I had reserved it, right smack at the start of summer and tourist season, there hadn’t been a whole lot left to choose from—as in, there had been next to nothing. I’d come up with the idea of going back to Pagosa Springs two weeks ago in the middle of the night while the weight of every choice I’d made in the last fourteen years rested on my soul—not for the first time either, more like the thousandth—and I’d fought not to cry. The tears weren’t because I’d been in a room in Moab all by myself with no person who gave a shit about me within a thousand miles. They had sprouted because I’d thought about my mom and how the last time I’d been in the area had been with her.

And maybe just a little because I had no clue what the hell to do with my life anymore and that scared the hell out of me.

Yet that was when the idea had struck.

Go back to Pagosa.

I’d been doing a lot of thinking about what I wanted, what I needed. It wasn’t like I’d had anything else to do being by myself nearly nonstop for two months. I’d thought about making a list, but I was done with lists and schedules; I’d spent the last decade listening to other people tell me what I could and couldn’t do. I was over plans. Done with a whole lot of things and people, honestly.

And just as soon as I had thought of the place that had been home once, I knew that was what I wanted to do. The idea just felt right. I’d gotten tired of driving around, looking for something to set my life back into some semblance of order.

I’d figure it out, I had decided.

So what if it was June? Who said your new year had to start on January 1st, am I right? Mine had officially started with a lot of tears on a Wednesday afternoon about a year ago. And it was time for a newer version of the person I’d been back then.

That’s why I was here.

Back in the town I’d grown up in, twenty years later.

Thousands of miles away from Cape Coral and everyone and everything in Nashville.

Free to do whatever I wanted to do for the first time in a long, long time.

I could be whoever I wanted to be. Better late than never, right?

I blew out a breath and shook my shoulders to wake myself up a little more, wincing at the ache that had taken them over, back when I’d gotten the rug pulled out from under me, and never left. Maybe I had no real idea of what I was going to do long term, but I was going to figure it out. I couldn’t find it in me to regret my decision to drive here.