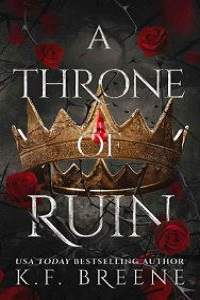 My heart thudded in my chest as I searched the Forbidden Wood for the beast, the same ground-bound dragon I’d once run from in terror. My animal roiled inside me, stalking him with me. I’d left home hours ago, in late morning, and there was still no sign of Nyfain. Granted, he had a substantial head start, since he’d left my family cottage last night after feeding us sleeping herbs to keep me from following, but I couldn’t shake the fear that I’d stumble upon his broken and bloodied form.

His duty might be to guard the wood, to protect our kingdom’s villages from the creatures the demon king unleashed on us each night, but he was in no shape to play Mr. Hero. It didn’t matter that he was our prince, our only hope of escaping the curse. The tracks I was following only proved he needed time to recover, curse the goddess. They zigzagged on the trail, bumping into a tree here, stomping through thorn bushes over there.

Everlass made for a potent cure, and I’d learned that the leaves of a crowded plant, which could be lethal if used incorrectly, were capable of reversing the effects of poison. Still, it was obvious the elixir I’d given him hadn’t fully restored him. The effects had worn off, and he was in pain.

The dappled light highlighted a huge splotch of deep red on the ground. My gut twisted as I slowed, panning my gaze over the area. I spotted the extra set of tracks mingled with those of the dragon. These were slender and long, with three toes and an imprint in the dirt that suggested claws. The creature, whatever it was, walked on four feet. It must’ve lunged out from the trees, because its tracks seemed to come from nowhere.

The bark of the closest tree had been abraded by a tough hide. Branches lay on the ground, ripped from the trunk.

This was the third battle scene I’d come across since leaving home. Evidence suggested Nyfain had won the others, but panic still skittered through me as I followed it away right. A large hole had been chopped through dense bushes, Nyfain’s huge dragon form forcing the foliage to make room. Blood smeared the green and streaked the ground. On the other side, I heaved a shuddering sigh.

A strange creature with oily, grayish scales lay twisted, its back broken and its head torn off. Nyfain’s tracks led away, heavy and clumsy. Blood splattered the ground. He’d taken damage.

I could feel my animal holding her breath. Pain and sadness radiated from her, the effect of Nyfain’s dragon ripping away our connection to them. Nyfain hadn’t said why, other than that he wished to grant us freedom. She was just as terrified to find a broken dragon at the end of this trail as I was.

Nyfain’s mouth-watering smell of pine and lilac tinged with honeysuckle dusted some bushes. His tracks led left now, not going toward the castle. Stubborn man that he was, he’d been looking for more creatures to dispatch.

After another hour and more blood splatter, I saw that he’d found one. A large biped with small arms and a large jaw. It had its stomach ripped out. Even more blood led away from this battle.

I don’t like this, my animal said as we took in the scents and followed the tracks. He lost too much blood.

As a man, yes. But his dragon is big. Maybe if he just stays in beast form until he heals it’ll be okay?

She didn’t answer. She probably didn’t know, since I’d never shifted. The same curse that haunted these woods had sickened the villagers throughout the kingdom, paused time at the royal castle, and, perhaps worst of all, prevented our people from shifting as nature intended. As far as I knew, only one person still could—Nyfain—although it had cost him dearly. His dragon’s wings had been shorn off.

I could hear my animal’s thoughts, feel her emotions, and use her primal senses, but that was where it stopped.

We wound deep into the wood, the gnarled trees bent and twisted, much like the dead bodies of the demon creatures that had been set loose last night. Scraggly bushes reached across the path, some of them stomped and broken from Nyfain coming through. I didn’t even need to follow his tracks now, just had to watch for the crimson droplets that announced his passage.

A bird chittered in the treetops, answered by another. A small rodent scrabbled out of the way. My connection with my animal had also increased my sense of hearing. Not much farther and I heard voices, a man and a woman talking.

I hefted the dagger I held, content to keep the pocketknife stowed, and crept closer, staying behind a wall of browning and crackled greenery. My animal plucked smells out of the air, analyzing them as we made our way. Clean smells, like laundry and lavender soap, layered over the more pungent scents of sweat and blood.