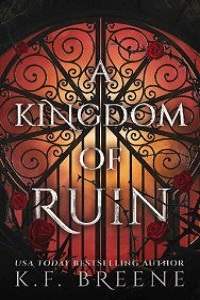 I slid off the demon king’s shoulder and crashed down into the soggy mud and weeds. My left hip struck a rock, and pain exploded through me, adding to the aches and bruises I’d accumulated on our three-day journey to this accursed place, the demons’ kingdom. My sword was still sheathed at my side. The demon king, Dolion, had allowed me to bring it, knowing I didn’t know how to use it. It was his little joke.

“Yeah, sure, just put me anywhere,” I mumbled, wincing as I pushed away from the rock.

The large, magically powered boat that had borne us to this dark and rain-streaked island bobbed in the murky sea behind us, anchored. Rowboats floated from it, washing onto the sandy shore and unloading the demons and various cargo.

Boots squelched in the mud next to me before Jedrek, my dipshit betrothed, crashed down beside me, crying out.

His previous transportation, a hard-faced demon with plenty of strength hidden within his wiry frame, swung a foot into Jedrek’s middle. Jedrek cried out again, rolling through the mud and weeds to get away.

“It’s fine. He’s just getting used to this.” I put out my hand and leaned toward Jedrek, doing very little to shield him with my body. I’d learned by now that if they really wanted to lay into him—or me—they were going to do it. Still, I couldn’t help trying to intervene. The only reason Dolion had lifted his magical suppression spell from our people was because I’d agreed to marry Jedrek. Which meant he needed to stay alive for the time being.

“Welcome to my castle, princess.” Dolion looked down at me with a smirk on his blue face. Rain slid down the dark horns curling from his head. “Your new home.”

Sorrow rose and squeezed my heart. The hollow pang of loss threatened to bring tears to my eyes as I remembered the way Nyfain looked at me before I was taken away. His utter despair. His desperation to keep me with him, in his kingdom and in his life.

In the end, he’d let me go. I knew he believed it would be forever. He thought I would break free from the demons, something he was confident I could do, and live my life elsewhere. My happiness mattered to him, and he didn’t think he had anything to offer. Idiot. I would absolutely go back to him. The only reason I’d agreed to this farce was to get the suppression spell lifted. I would suffer anything to free my kingdom and my mate. With that spell gone, Nyfain could use his alpha magic to pull out everyone’s animals. He could give our people a fighting chance… Because I would escape—straight back to Nyfain—and we would break the curse together. Then it would be time to fight.

I held on to my resolve with everything I had and looked up through the driving rain, determined that Dolion would never see my pain. He would never know what all of this was costing me…or Nyfain.

“Quite the welcome mat you’ve rolled out,” I said, lifting my hands and turning my palms up to look at the mud now caking my skin. “Did you do the landscaping yourself?”

He scowled at me, his gaze roaming my face. Darkness cascaded around his narrow shoulders like a cloak. “So strong. So stupid.” He stepped forward and kicked, his heavy boot landing on my upper thigh. Pain vibrated through me. “Look at it!”

I tsked, but did as he said to stave off another kick. He’d done a good job at acting suave and balanced within Nyfain’s castle—except when Nyfain was thwarting his commands—but he had a volatile temper. Not just directed at Jedrek and me, either. He doled out harsh punishments to his own people if they didn’t follow his commands quickly enough. Do something wrong, even by accident? The punishment was worse still. He used his power and position to bully others. He led through fear.

I knew from history books that those types of leaders often had precarious perches on their thrones. I wondered how easy it would be to topple him.

“It’s nothing like that dragon hovel you’re so fond of,” he said, and I could hear the smug pride in his voice.

He’s got that right, my dragon murmured.

A formidable castle sat on top of a hill. Pale moonlight peeked through a break in the heavy clouds, washing across thin spires, bulky towers, and the castle’s sprawling, disjointed architecture. Arrow slits punched through the first two levels, giving way to more modern rectangular windows for the next two. The fifth level looked like a sort of fortress, with sleek stone walls and a fresh feel that suggested it had been built sometime in the last hundred years.