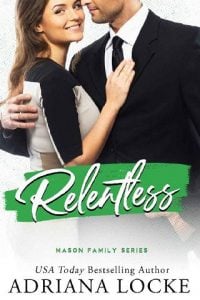 I just had to sneeze.

My breath rushes in and out in quick succession, yet somehow isn’t enough. I open my mouth to drag in more oxygen so I don’t pass out.

The last thirty seconds are a muddled mess. I try to sort through them—there was the sneeze, that I remember—but it feels like trying to make sense of a huge ball of yarn that’s been batted around by a kitten.

I grip the back of my neck. The pain is immediate, as though someone flipped a switch and—voila!—the discomfort begins. I wonder vaguely if it’s due to the impact or from the shadow of someone coming around the side of my car.

Something tells me to find my insurance card. Please, let me have my insurance card. I reach for the glove compartment, figuring it’s where the responsible version of me would’ve put it, and glance up into the passenger’s side window just as the person who I rammed with my car appears.

My hand falls to the seat next to me, covering a ketchup stain from an errant fast-food cheeseburger. It flew out of my hands last week during an impassioned concert I put on at a red light.

“Sometimes” by Britney Spears just gets to me.

As does the stranger at the window.

I’m not sure what I was expecting, but this wasn’t it. It wasn’t blue-green eyes that remind me of the ocean in postcards from faraway places peering back at me. Or sun-kissed skin. It definitely wasn’t beautiful lips and a jawline that’s squarish and bold.

I fall back into the seat as a surge of adrenaline rolls through me—my wits frazzling more by the second—and try to keep my composure. I just hit a man’s car.

He watches me quietly, licking his lips as if he’s having a hard time comprehending the situation. It gives me a moment to regroup.

A quick once-over puts him in his mid-thirties. He’s ludicrously handsome. Brown hair kissed with a touch of blond is cut short to his head and styled as though he rolled out of bed looking that handsome. A deep-blue Polo shirt is stretched across broad shoulders. Lines around his mouth and eyes lend an approachability, a warmth to his features.

I say it before I can think about it, which is unfortunate. My insides shrivel as the look on his face changes from concern to … surprise? Confusion? Judgment? I don’t know which it is, but it’s clear he’s thrown for a loop.

“Look, I’m not any happier about this than you are,” I say, glancing at his dented Range Rover. “Actually, my insurance rates are going to go up, and that’s devastating.” I look at him again and gulp. “Okay, devastating might be a stretch, but I’m not looking forward to it.”

He blows out a breath. I swear I smell peppermint.

I think he means it like, Did you hit your head or something? but I can’t really tell.

His voice is honeyed and sympathetic—not at all the cool and annoyed tone I predicted. Sadly. Irritated would’ve been easier to accept when I replay this scene in bed at three in the morning.

“Are you all right?” he asks again.

His brows pull together. “Why don’t you step out of the car so we can figure out what to do?”

I reach for the glove box again. “My insurance card. You probably want that.”

“Why don’t you … Let’s make sure you’re okay before we get into the insurance and stuff, okay?” he asks gently.

A quick scan of the glove compartment proves that the responsible me was not present the day I got my card from the insurance company. And I know for certain I didn’t download the app like they suggested.

Who needs an app when I have a paper card? I don’t need another dumb app.

I distinctly remember thinking that.

I sit back in my seat again—a little taller this time. I’m going to have to fake having my life together.

“My card is missing in action at the moment,” I admit. “But I have insurance. I swear.”

He holds his hands out as if the movement will calm me somehow. “It’s okay. Let’s start here—what’s your name?”

“Shaye. My name is Shaye Brewer.”

“Shaye.” He says it as if he wondered what it would sound like in his voice. “Okay, Shaye. I’m Oliver Mason.”

“I really am sorry for … that.” I shift my eyes quickly to the location of our cars kissing and then back to him again. “It was an accident.”

His lips dip at the sides as though he’s fighting a smile. His eyes don’t fight it, though. The sides crinkle, the irises light up, and the blues and greens mix into crazy pools of color that are almost hypnotic.