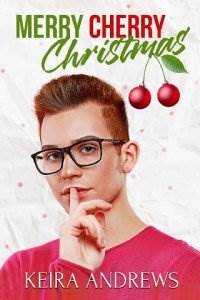 Flat on his back—and not the way he wanted—Jeremy couldn’t breathe.

I’m going to die a virgin.

The campus pathway’s icy concrete was brutally unforgiving. Freezing-rain pellets peppered Jeremy’s face like Mother Nature opening fire with a machine gun. Falling had completely knocked the wind out of him, and he blinked up at the blur of a lamp post wound with holiday lights. Without his glasses, the starbursts of blue and white were massive in the darkness.

He could hear laughter and wondered if he’d said the virgin thing aloud. Male voices hooted and howled, and if Jeremy hadn’t managed to knock off his glasses when he’d flailed on the ice, he’d probably see the guys pointing at him too.

“Too bad we didn’t record it.”

“Stop being dicks.” A baritone cut through the laughter, coming close to Jeremy, a shadowy figure blocking the blurry light as the person leaned over him. “You okay, man? You went down hard.”

Jeremy’s lungs still didn’t want to work, and when he tried to answer, it came out as a gasping squeak. More laughter echoed in the frosty night. He needed his glasses but couldn’t seem to make his arm move to feel around for them on the treacherous pavement. His body had seized up, pain radiating from his back. He probably wasn’t going to die, but it hurt like hell. His face stung as more freezing rain pelted down.

“Did you hit your head?” the husky, concerned voice asked before snapping, “Guys, shut up already! It wasn’t that funny!”

“Dude, come on. Holiday Hootenanny waits for no one. If we miss the Santa and his little helpers strip show, I’m gonna be pissed. He’s fine. Right, buddy?” Another figure bent over Jeremy, and a fist punched his shoulder in a way that was probably supposed to be encouraging but just added to the throbbing pain. “Like a hard tackle. Knocks the piss outta ya, but you’re okay.” Then the hand was hauling Jeremy to his feet.

The deeper voice protested. “Stop! Seriously, he might have hit his head.” This guy’s hands were gentle, taking hold of Jeremy’s shoulders with comforting strength. Without Jeremy’s glasses, his rescuer’s face was still a blur even at arm’s length.

Jeremy forced a breath, although the cold air didn’t help his seized lungs. He rasped, “I think my head’s fine. Thanks.”

“You sure?” His rescuer still held Jeremy’s shoulders, his breath clouding in the cold air. “What’s your name?”

“Me?” Jeremy asked, because he was never not awkward AF. He flushed, but at least his pale cheeks were probably already pink from the cold. Like most redheads, his blushes could be seen from space.

The guy chuckled with another puff of warm breath. “Yeah, you. I’m Max. What’s your name?”

“You don’t sound very sure.”

Someone else said, “Come on, this weather sucks. The kid’s fine. He’s standing and talking.”

“Considering how many concussions you’ve probably had, you should know that doesn’t mean shit,” Max said, his tone sounding like an eye-roll.

“Okay, Jeremy Rourke. I guess I have no way of verifying unless I check your wallet. So, what day is it?”

There was a frown in Max’s voice. “You don’t sound too sure about that either.”

“I’ve been studying for exams all week. It’s a blur. My last one’s on Wednesday. So yeah… It’s Friday.”

“Uh…” Jeremy worked backward from the Wednesday exam date. “December thirteenth.” He groaned. “Friday the thirteenth—it figures. Really, I didn’t hit my head. I’m good. Thanks.” He shivered, his thin rain jacket not doing much to block the wind, jeans soaked from where he’d sprawled on the ground. The freezing rain whipped around them.

Ignoring his friends, Max prodded the back of Jeremy’s head. “Not tender at all?”

“Nope!” Oh lord, this Max guy was touching him. Jeremy kept his hair short and neat but barely resisted the urge to smooth it down on top in case it’d gotten messy in the fall. “I managed to keep my head up when I went down.”

Max leaned back, dropping his hands. “Okay, if you’re sure.”

There were five blurred figures around them on the pathway. “Can you just find my glasses?” Jeremy asked. “I can’t really see anything.”

“Totally,” Max said. “They must be—” The snap-crunch was sharp in the night, and everyone seemed to freeze. “Motherfucker,” Max breathed.

After a beat of silence, Max’s friends howled with laughter again, one of them wheezing and exclaiming, “Holy shit, dude. They are toast!”

Max barked at them to shut up as he crouched. He stood again. “Yeah, uh, I stepped on your glasses. The frame’s broken in half and the lenses are cracked. Well, one is cracked and the other is, like…”

Hot and cold all over, Jeremy ordered himself not to panic. How was he going to get across campus to his dorm room without his glasses? He blurted, “But I can’t see!” and cringed at the terror in his voice.