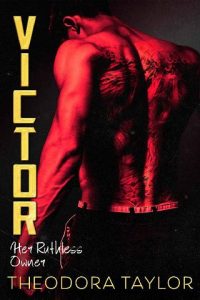 A cold winter day at the beginning of summer

A ring. I was looking at a wedding ring. My ex-boyfriend wanted to marry me. Not for love. But for revenge.

Revenge. That word echoed inside of me, louder and louder with every passing second. Meanwhile, Victor stared at me over the box he’d opened after informing me that ten years of ownership would be the price for my betrayal.

He looked so different from the boy I remembered. The messy hair he’d let get so floppy while we were dating was all business now. His inky locks might have still been long on top, but they’d been ruthlessly gelled back and molded into place. Underneath his thick brows, his eyes had somehow gotten even darker. The kind of dense black that put me in mind of the mysterious holes in outer space that depending on who you asked, could either crush you in an instant or send your spaceship hurtling to another time or dimension.

His face was still a beautiful sculpture that even a lapsed artist like me would want to capture on paper. But the planes of it had sharpened over the years. They were now razors that cast shadows.

I’d only compared him to a raven in my mind before. That “like” stuff was done. He was the human embodiment of that infamous and scary bird. And I was sitting right across from him.

Victor. The boy I fell in love with when we were both high school students in Japan.

Victor. The mafia prince I had watched kill a man in cold blood. Without blinking an eye. Less than an hour before he proposed to me.

Victor. The ex who was now proposing again.

Despite Mount Holyoke’s best efforts with required writing classes, I still had to majorly edit myself. At least when it came to Victor.

Commanding. He was commanding ten years from me.

I was breathing. I must have been breathing, or else I would’ve passed out. That’s basic biology. But for an eternity of minutes, there was no air to be had. I couldn’t inhale. I couldn’t talk. I couldn’t even think.

May 25th. That had been the date we’d agreed to get married on four years ago. One of the many promises we had made to each other. Before it all fell apart.

And now, here I was on that very same date. Sitting in front of some town hall in Rhode Island, the monster’s expectations hanging heavy in the air.

All I could do was stare at that ring. He wants to marry me.

Not out of love, I reminded myself as my lungs gasped for air. But out of revenge. Again, that word echoed inside my mind.

Victor snapped the box closed. And the sound brought me out of my eternally held breath. I greedily gulped down oxygen as if he’d been strangling me while making his crazy demands.

He set the ring box down in the seat beside him. Like it had somehow become a living participant in our conversation. Then he signed, “So you are choosing the destruction of your family over my ownership?”

The destruction of my family? Was he serious?

It was almost too much air now. His threats, combined with all that oxygen, made me dizzy like I was about to pass out. “This is insane. Why don’t you just kill me and get it over with? Why threaten my family? Try to make me marry you? I mean, ten years…what is that number even? How did you come up with that calculation?”

“Ten years is the sentence my father was given after his plea deal,” Victor explained, his expression impassive.

My mouth dropped open. “He only got ten years for killing that guy?”

“He was sentenced to ten years for cutting off the nose of a fellow gang member,” Victor answered. He almost appeared bored with the conversation. “It was part of a plea deal that included my release, or he wouldn’t have even gotten that. However, he died of cancer before he could serve that unnecessary prison sentence.”

“He died? Your father’s dead?” My heart stopped at this new information. Then filled with sorrow for Victor.

He’d lost his father. He was an orphan now. No wonder he looked so ravaged.

“Victor I’m so sorry for your loss. I know you loved him…”

I gave him my condolences, then felt terrible because I had to add, “But that’s not on me. I shouldn’t have to serve his time.”

“I read the case reports,” Victor answered. His expression was a cold blank. “The footage you provided was the cornerstone of the case against him. If not for you, he might have gone to a doctor sooner. He might still be alive.”

“I don’t know what was in those reports, but I was just as surprised as you were on the day of that raid. I didn’t know—”