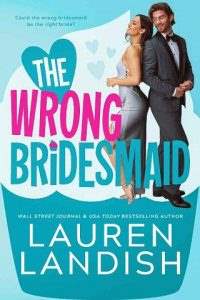 Wyatt Ford hightailed it out of Cold Springs to get away from his influential family and the unwanted privilege that came with it. Returning for his brother’s wedding dredges up every reason he left. One unexpected bright spot: a curvy knockout who slings burgers, hustles pool…and hates the last name Ford.

Hazel Sullivan is fiercely independent and happy to be maid of honor for her best friend’s wedding, but she isn’t looking for romance. Especially not with a man whose family is dividing her town into a battleground with their development plans. Fighting the family is easy. Fighting Wyatt? Not so much. Why does the enemy have to be so drop-dead gorgeous?

The sparks that fly between Hazel and Wyatt might start out as combat, but one kiss and it’s total surrender. How is a happy ever after even possible for two people with so little in common? Except, of course, for an overwhelming attraction and that growing temptation to say “I do” themselves.

A lot of people ask the universe for “a sign” when they’ve got a decision to make. What I don’t think they expect is for it to be a five-foot-wide by three-foot-tall green-and-white reflective chunk of metal with questionable punctuation and capitalization. I certainly didn’t. Though the extra exclamation points and overly emphatic capitalization do make me snort a little.

The sign is the doing of the one and only Francine Lockewood, Cold Springs’ librarian and self-proclaimed historian. When the oldest elder in town declares the city council is being old fuddy-duddies and that she’ll haunt the entirety of city hall if the winner of her slogan competition isn’t honored, it’s hard to disagree. Of course, the fact that no one had condoned a contest to begin with, and Francine had taken it entirely upon herself to run one, meant nothing.

I remember hearing my dad bitch about it, but in the end, Francine won. The city council ponied up $1,000 for that sign just to stop her from whispering to every school kid, soccer mom, and library visitor about the council members. They were protecting their jobs, what with an election coming up. Besides, it is sort of friendly and quaint, so maybe it is a little bit of a good sign?

Better than the one that actually drew me home, at least: the wedding invitation in the passenger seat of my truck. That one hit me like a bolt from the blue—literally, since my mailbox is blue. It’s the universe telling me to handle my shit like a grown-ass man. Point taken, albeit reluctantly. Coming up to a red light, I glance at the ivory, heavyweight cardstock with fancy gold embossed script for the dozenth time.

The pleasure of your company is requested at the marriage of

The words alone are shocking, but I still might’ve ignored the invitation despite the fact that my younger, perpetual-bachelor brother is apparently getting married. The accompanying handwritten postscript hadn’t been as easily dismissed.

Come to the wedding, Wyatt. I want you by my side. Please. —Winston

Even then, if he’d left it at the first two sentences alone, I would’ve skipped and claimed my invite was lost in the mail if anyone ever called me on it. Not that they’ve called me in the years I’ve been gone. But that last little bit, the please, had been my undoing.

Once upon a time, Winston and I were close. He and I were united, allies in a struggle of behavioral appropriateness and familial expectations that eventually had me leaving town. And despite our relationship growing distant since I left, our bond is still strong. If I were getting married—which I’m never going to do—I would want him by my side. Hell, I’d even go so far as to admit that I’ve missed him, and some other members of my family, but not enough to go back. Until now.

So here I am, drawing closer to the town that never did anything for me but expect my sweat and tears simply because of my blood. Cold Springs, the city that is both kingdom and prison to my family.

My father isn’t simply on the city council that argued with Francine; he’s been on it for most of my lifetime, and is currently the mayor.

My mother? President of the Junior League, former head of the parent-teacher association, and back in the day, Miss Cold Springs herself, who took first runner-up at the state contest.

The Fords are Cold Springs. For a lot of people, it’d be enough. I could’ve set myself up as a small-town prince.

Except I don’t want any part of it. I didn’t when I was younger, and I still don’t now.

Francine was right about one thing—this town does have scenic vistas, but there will be few to no friendly faces for me on this visit. Thankfully, the rolling green hills and bright blue skies are beautiful enough to make up for it.

I roll my window down, calling out to the trees, “Home sweet home. You miss me?”

The wind carries my words off, the trees ignoring my question as they focus on photosynthesis, and I suck in a deep breath of fresh, crisp air. As my lungs expand, my gut turns, souring the sensation.

This is going to be a clusterfuck of epic proportions. There’s no way around it. I’ve found peace and enjoy a life where I’m not judged on my last name, except by car lovers. I’ve settled into a routine of my own making, but returning to my hometown automatically dredges up all the reasons I left.