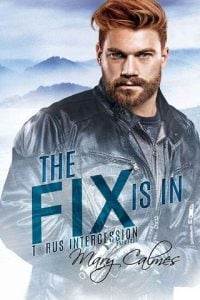 My boss was a sap. Not that this was something I was ever going to say to his face, as my survival instinct was much stronger than that, but every now and then, he went and did things that were so clearly driven by his desire to “do good” that it lapped right around the other way to the absurd. Case in point, I was in Rune, Oregon, a small—like, postage-stamp small—town between Tillamook and Seaside, on the Oregon coast, up near the border of Washington, to protect Benjamin Grace from—his friend and partner Sian Delaney had reported—bad people who were out to get him. Whatever the hell that meant.

The question was, who was Mr. Grace and why did he need protection? Who had he pissed off? What did out to get him entail? Most importantly, did the threat to him constitute a need for Torus Intercession, a company that provided advocates, bodyguards, and fixers at a price befitting round-the-clock intervention, or was the situation, whatever it was, blown way, maybe even way-way, out of proportion? Of course, the only way to truly assess the threat was to go there.

“I’m stunned, Shaw,” Ella Guzman had announced the day before, studying my face as I explained the job. “I had no idea we took on any kind of pro-bono work.”

“We didn’t until he opened his big fat mouth,” I grumbled, pointing at Cooper Davis, who was sitting across from me.

She turned to look at him, both of her perfectly shaped dark-brown eyebrows lifted.

“What?” His voice was higher pitched than normal, which made him sound guilty as hell.

“Give it a rest,” Nash Miller insisted. “It was all you, buddy.”

Cooper looked at Ella, shaking his head. “No.”

She leaned back in her chair; arms crossed. “Speak, Davis,” she ordered, using his last name for emphasis.

“Yeah, okay, so technically, maybe, this could possibly be construed as partly my fault,” Cooper conceded with a grimace.

Cooper threw up his hands in defeat. “Fine, it’s all my fault.”

It was one of those rare times where none of us were out of state on a job, all of us there in the office in Oak Park, Illinois, so we’d decided to go to lunch together, en masse, and then my phone buzzed with a message from my boss and my whole afternoon went down the toilet.

Cooper cleared his throat. “Okay, so a year or so ago, when Jared was going through all our performance appraisals, he asked me what I felt we could be doing to include syzygy in our lives, and not just at work.”

“You know, that word threw me the first time I heard it,” Rais confessed, shooting the waitress a dazzling smile as she refilled his water glass, making her almost drop the pitcher. He was a handsome man and, much like others I’d known, knew how to work any situation to his advantage.

“Yeah, I would have had no idea what it was without him using it in a sentence,” I admitted as well.

“None of us knew,” Cooper assured him. “It’s a weird-ass word, and Jared uses it because his vocabulary is ridiculous, but so when he asked me, I thought I was supposed to come up with something.”

“Instead of doing what I did,” Nash remarked sourly, “what all the rest of us did, and telling him that everything’s great here at Torus.”

“Uh-oh,” Ella said with a snort of laughter.

“Tell her what you said, jackass,” I prodded him.

Long, weary exhale from him. “Okay, so I said I thought it would be good if we took one case, just every quarter or so, free of charge, and fixed something for someone who needed it but couldn’t afford to pay us our usual fee.”

“Asshole,” I muttered under my breath.

“Kiss of fuckin’ death,” Nash grumbled, but smiled when our waitress, and another, put three large deep-dish pizzas down in front of us, two spinach and one sausage. We were at Lou Malnati’s on Lake Street on a not-super-warm Thursday afternoon the second week of December, and even though I’d wanted Chinese, now that I was smelling the pizza, it was all good.

Holding up his plate as Nash cut—why we all waited on Nash Miller, I had no idea—Cooper’s left eye fluttered like he’d bitten a lemon. “So Jared goes, ‘that’s a great idea. I’ll put an ad up on YouTube.’”

“Oh please, this is Jared. Of course he did,” Nash told her. “You should see it. He had Owen film it and edit it, and he’s sitting there, all earnest and fatherly, and once a month Owen has to go through all the whack-job comments, and he makes sure Jared never sees the ones that start with ‘Oh, Daddy’ and get more disgusting from there.”