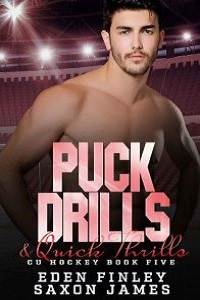 I march across campus like I’m on a mission. Because I am.

Professor Eckstein just made my shit list, and it’s really hard to do that. I don’t hate anyone. I rarely get mad. Unless it’s at my brother, Asher, for doing something stupid. Which he does. A lot.

Being a hockey coach and ex-NHL player, I have dealt with a lot of overgrown, testosterone-filled man children in my life. It takes some epic levels of assholism to piss me off. Without having met Professor Fuckstain, he’s already managed to get on my bad side. What kind of coldhearted A-hole does he have to be to deny a student extra credit when they’re dealing with real-life shit?

My brother’s grades aren’t great—I’m not delusional here—and yeah, he could maybe dedicate more time to study, but when? When does Asher get the chance? He goes to classes, then to hockey practice, and then we go home to a house full of kids that I’m responsible for because our parents went out to dinner one night, lost control of their car, and never came home.

I’m the legal guardian of five minors when a year ago, I was throwing my money away on partying and sleeping with anything that moves.

Responsibility hit me harder than an enforcer with a grudge, and it feels like I’ve been slammed into the boards repeatedly ever since.

There’s no way I could handle it all on my own, so I asked Asher to postpone his spot in the NHL to play Division I college hockey and help me around the house. It’s only until he graduates and the kids are a bit older. Hopefully after four years, I’ll actually have the hang of this pseudoparenting thing. Asher may be above asking for help, but I’m not. Plus, I felt it needed to be us who looked after them. We’re their big brothers, and I didn’t want strangers raising them.

Because of the sacrifices Asher’s making, I’ll do anything to make sure the NHL is still in the future for him. I got my chance; he needs his. Just as soon as I figure out what I’m doing.

The first step of making sure that happens is keeping Asher on the team.

The fact he asked for extra credit and admitted he needs help is a big thing for my stubborn-headed twenty-one-year-old brother. And this fucking professor shoots him down because, why? He likes being a sadistic asshole to his students?

Asher’s not dumb. He has the brains, but it’s hard for him to retain information he doesn’t care about. He only cares about hockey, and until recently, I understood it because I was the same. Now I have other shit to care about, like making sure my five siblings don’t have a traumatic adolescence. I have to say, I’m not off to a great start.

I’m the epitome of that meme where everything’s on fire with the caption “Everything is fine.”

I’ve just gotten Asher to actually put in some effort with his classes, and I thought it was paying off, but I could tell as soon as he walked into practice today, he wasn’t only pissed off. He was defeated.

Isn’t it a teacher’s job to encourage their students?

I storm into the mathematics building but have absolutely no idea where I’m going. It’s been six years since I walked these halls as a student, and Fuckstain wasn’t one of the professors then, so I don’t know where his office is.

As I pass by the different lecture halls and classrooms, I scan each of the doors, trying to find his name, and then near the end of the building, I find it.

I barge through the door without even pausing to knock.

The guy behind the desk startles at my abrupt entry, but all the words die on my lips as soon as we lock eyes. His are the palest blue I’ve ever seen, and he has a jawline that could cut glass.

I was expecting an old, grumpy dude with gray hair and beard. I was not expecting … this.

Jasper Eckstein is sex wrapped up in the package of a Sunday school teacher.

From his light brown hair, filled-out muscles trying to break the seams of his tweed jacket, and pleasantly curious expression, I think I’ve walked into the wrong office. Or Eckstein shares the space with the Adonis in front of me. He’s midthirties at most. This can’t be the professor who has a reputation for hating jocks. He doesn’t look mean enough to be bitter.

But then he scowls and proves me wrong. “Can I help you?” He’s eyeing me the exact same way I’m doing to him, but his gaze catches on the logo on my polo shirt—a C and U with the word hockey underneath.

He cuts me off. “You’re here about Asher Dalton.”