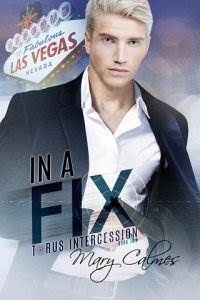 It was predawn, on a bitterly cold February morning, and I was sitting on an airplane, on a Wednesday, on the tarmac at Chicago’s O’Hare airport, currently not taking off, perhaps reevaluating my choice in careers, and maybe cursing my boss, Jared Colter, a little bit, for sending me on this assignment. Vegas? Who voluntarily goes to Vegas? What happens there, stays there—like that was supposed to be clever or edgy or something. And yet, here I sat, trapped inside a metal germ tube with a hundred other bleary-eyed souls, and apparently we were just going to try taxiing all the way to Nevada, now… Maybe drinking until I passed out wasn’t such a bad idea.

As usual, I had been the first one to arrive at the offices of Torus Intercession the morning before, so I put the coffee on for my colleagues and tea for myself. Because I was civilized, for God’s sake. I’d been on the receiving end of more than a few snide comments from the guys about my cozy-covered teapot, over the years. Until, that is, Jared started drinking whatever I brewed. After that, the snark dried up pretty damn fast. If the alpha male, ex-CIA, black ops guy drank tea, then I got a pass too.

It was still dark and overcast outside when the rest of the guys started trickling in, the contrast between the warm glow in the office and the winter’s gloom marked by Jared’s preference in lighting. Our boss hated the harsh glare of florescent bulbs and declared, in no uncertain terms, that no one thrived in that kind of synthetic environment, which was why we all had desk lamps to complement the overhead track lighting. At the moment, the lamp beside Locryn Barnes’s monitor was illuminating the blue-black highlights in his thick shoulder-length hair and making his eyes glitter like obsidian as they lifted to me.

“Locryn,” I began gently, kindly, trying for patience, “the rest of the team barely tolerates you. I’m your sole advocate; try not to alienate me before lunch.”

It’s true I admired beauty wherever, or whenever, I encountered it, and Loc had taken my breath away from the first moment I saw him. He was a remarkable study of sharp angles and curved, rippling muscles under smooth olive skin, with a face that could have been sculpted by a Renaissance master. The artist in me recognized how breathtaking he truly was. The spell woven by his appearance was broken, however—quickly and decisively—when he opened his mouth.

It was unfortunate he had to speak. Ever.

“Good morning,” I greeted Cooper Davis as he hung his coat on the rack by his desk.

Locryn grunted, as was his way, not the king of communication by a long shot, and I didn’t miss that he and Cooper weren’t speaking.

“Morning,” Cooper muttered his reply, his eyes flicking to Locryn and then to me. “Did you make coffee, or just the tea of your people?”

He was alluding to the extra strong Irish Breakfast I normally made.

“Just so we’re clear, it’s the tea of his people, not mine,” I apprised him with a tip of my head at Locryn. “I’m having Earl Grey this morning, for your edification, though I was kind enough to get your black tar brewing as well.”

“Bless you,” he said kindly, gifting me with a trace of a smile before standing and walking toward the back. “For someone who doesn’t even drink coffee, yours is always good. Way better than the rest of us manage.”

My smirk was smug, I knew, but the man was not lying. I’d smelled some of the stuff he’d tried to brew. It was unholy.

I turned back to Locryn, who glanced up at the same time.

“What?” he half snarled, glaring at me.

I barely stifled my groan. “Could you at least do me the courtesy of not acting like a complete ass first thing in the morning?” His constant belligerence was so much more than grating.

“The fuck did you say?” he bristled, evident in the way his voice rose an entire octave, and in the way his eyebrows furrowed over the bridge of his nose. His scowl alone was menacing, but made even more so by the chroma of his dark eyes, black brows and hair. Locryn Barnes was the perfect storm of fire and ice, and I seemed to be the only one who knew how to handle him.

“Listen, I know why you’re angry,” I offered, sick of him walking around being nothing but foul for the two months since Brann Calder, our former colleague, quit. They had become lovers soon after Brann started working at Torus, and the fact that they thought no one knew was ludicrous. The sexual tension had been knife-cutting thick, and a constant source of eye-rolling for the rest of us. I hadn’t thought it was serious, just the two of them having fun and letting off steam, but the way Locryn was living under a cloud of what came across as both anger and frustration, I now surmised it was far more serious than I’d given the situation credit for. Maybe it had been special for Locryn but not for Brann. Whatever the case, I truly only cared insomuch as the rest of us were left to deal with a surly, brooding, hair-trigger Irishman, while Brann was happy and in love off in Montana.